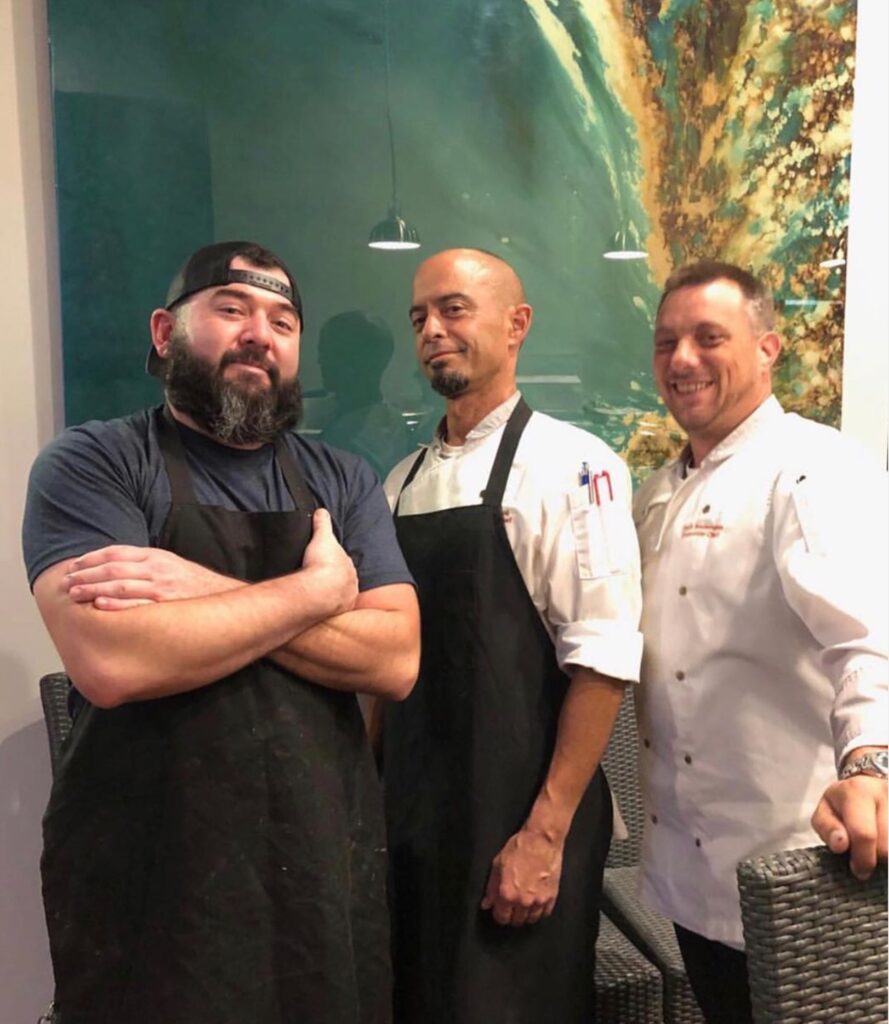 Eaten here with us, or taken to go, you will be impressed!!

Takeshi Trinitapoli was born in Kyoto, Japan in 1967 and moved to the U.S. in 1970. He began studying sushi in 1986 as an apprentice to Chef Fred Yamada at Restaurant Fuji in Scottsdale. In 1989, Takeshi moved to Florida and continued his studies under Chef Sasaki at Shiki Restaurant. After returning to Phoenix in 1994, he once again worked with Chef Yamada at Yamakasa until 1996 ,when together, they helped establish Sushi on Shea. ( the predecessor to Kona Grill] in 1997, Takeshi decided to take his sushi skills on the road and moved to Vallich, Austria for a bit. There, he helped set up and open Kabon Sushi and Pasta, before returning to Scottsdale to work with Chef Tai Obata to open Ra Sushi. In 1998 he took over the Kona Grill Scottsdale location, and by 2004 he had the title of Corporate Executive Sushi Chef.

That’s when he met Zach.

Zach Bredemann was born in Salt Lake City, Utah, in 1974. From a young age, Zach discovered his love of cooking for others. It started with growing up in a house full of bathroom hogging sisters. With no formal culinary training, he dove into the restaurant industry as soon as he could. With his passion for food and hard work, by 1994 he was a Culinary Supervisor for Buca Di Beppo. He spent 10 years moving from city to city opening 29 new stores across the country, and supervising 33 stores at one time. Through these adventures , he learned how gratifying it was to craft new recipes to capture the heart and spirit of different people and regions he visited. In 2004, Zach joined the Kona Grill team as their Corporate Executive Chef.

That’s where he met Takeshi.

Together they helped grow the Kona Grill brand to over 45 stores WORLD WIDE! They regularly enjoyed playing with the Kona menu to keep it fresh and exciting throughout their years together. Though Takeshi has always enjoyed the amazing Japanese cuisine, Zach was lucky enough to experience total emersion on their trips to Japan, and he fell in love. At the end of 2017 they decided to leave Kona Grill and forge their own path, once again, together. Combining their joint skills and more than a decade long friendship, they have created…

A modern, fast casual, from scratch, sushi and ramen house located in the community of Gilbert, Az. They are offering traditional sushi, sashimi, poke’ and ramen at an amazing value. All dishes are made in house by their very talented hands and hearts.